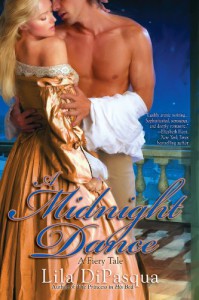 I have been looking forward to reading this book for quite some time and it has been well worth the wait! I truly fell in love with Sabine and Jules. Of course there were a few hiccups along the way but I was thrilled with how they ended up.

Sabine is the responsible one in her family and due to circumstances must now find a way to support that family and keep them out of debtor’s prison or from starving on the streets. Enter Jules, Sabine’s Dark Prince that she has not seen in several years.

Jules used to be an “Aristo”, but due to his circumstances he also now needs money to get back to where he used to be before his father was “wrongly” accused of being a traitor.

I loved all of the supporting characters, well almost all of them. There is a villain or two thrown into the mix towards the end of the book but I thought it added a nice mystery element to the story.

I like how the story ended and was pleased to see how Jules dealt with the differences that he and Sabine thought they could never surmount. All in all a nicely told story and I am eagerly awaiting more from Lila! Simple Italian meals. The ones I have tried have been very easy and flavorful. There are a few recipes where you need to plan ahead.
Tweet I really liked this book. I admit I was a little shocked since it is YA, but I enjoyed Sarah MacLean's adult historicals so I thought I'd give this a try. The romance was cute and sweet but I really liked the mystery as well. The characters acted appropriately for their age and the secondary characters were well rounded and interesting. It's been quite a few years (to say the least!) since I've been this age but I was still able to identify with their feelings and actions. I would recommend this to anyone who enjoyed Sarah's other books.
Tweet This is one of the first romance books I read over 30 years ago and I don't remember all of the details but I do remember that it taught me a lot and I enjoyed it at the time.
Tweet I read this book a few years after it was published. I think I was probably in eighth grade. And I obviously came away with something totally different from this book than most of the other reviewers did. Maybe I'm heartless but I had (and still have) no sympathy for a mom who would rather die than have her leg amputated. She would rather leave her words behind for her young daughter instead of being around to watch her grow up. Turns out nothing has changed in the past thirty years, except that now I have my own child and it makes even less sense than it did when I was a young teenager!

Two stars because I can still remember a lot of the story so it obviously made a big impression on me.
Tweet I liked the concept of this book but I did not think it was really all that scary. I don't mind graphic violence and gore but I would've liked a little more plot. Maybe with a longer story the authors could have built up the suspense a bit?
Tweet So, I just figured out that I really like a spy theme in my historical romance reads. Therefore this book was right up my alley. I truly enjoyed the Young Corinthian’s organization and the mystery plot in this novel, although the reasoning behind the kidnapping plot could’ve been better explained and expounded on. I also liked all of the characters but I did especially like Iron Will. Truth be told, I love an alpha male who doesn’t think he deserves the heroine’s love. And Will certainly didn’t think he deserved Lucinda’s love, but I did! And I considered Lucinda a fairly strong heroine who thought she knew exactly what she wanted in life. But her heart obviously had other ideas.

The attraction for these two was instant but I liked the way Will had to talk her into their “courtship” with the use of his horse. The heat level was a little mild and I would’ve enjoyed a few more sex scenes between our hero and heroine. And I just loved the aunts (“the furies”), though I would’ve liked to have seen a bit more banter with them. They added a nice little spark to the story.

Fortunately this book grabbed me from the beginning. I say fortunately because there were quite a few typos. Even though I was prepared for these typos (based on the other helpful reviews) it was still jarring and pulled me out of the story. I did like the story though and I really would’ve liked to have given it 5 stars, but 4 stars it has to be. I am not a huge fan of DDD, as a matter of fact I think it is on entirely too frequently! But I do enjoy catching it occassionly. I can only take Guy's over the top personality in small doses. That being said I did think this book was pretty good. I enjoyed reading about these small, independently owned establishments. And the recipes that were included were pretty interesting. I have by no means made them all but I did like reading them. As a glimpse of what to expect from Scandalous Desires this is a definite 5 stars but as a stand alone fairy tale it is 3 stars. So combined I give it 4 stars.
Tweet